Eddy currents are treated in many physics textbooks and many physics laboratories are equipped with a demonstration tool, called the Waltenhofen's pendulum.
In this equipment a copper (or other conductive) plate is suspended to the pendulum and passes in a constant magnetic field created by electromagnets or permanent magnets.
When the pendulum enters and leaves the zone occupied by the magnetic field a braking action is noticed, but no braking occurs out of the field and when the plate is fully immersed in it.
Another experiment, that more closely recalls the operation of the Megamag brakes, consists in letting fall a magnet inside a copper or aluminum tube, and then in a similar plastic tube. In the first test the magnet falls more slowly and at constant speed.
The foundations of the operation of magnet brakes are thus known from long ago; the brakes can be modelled and calculated with good realism: the braking force appears to be proportional to the speed (hence it is viscous) at low velocities, reaches a peak at a characteristic speed that depends only on the properties of the conductor, then decreases and tends to zero at higher velocities.
A new deal in the design of magnetic brakes for fun rides was due to the invention of the rare earth magnets: these materials allow to reach far higher magnetic energies than before, energies that would be obtained before only with electromagnets. 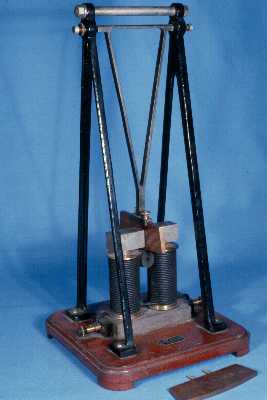